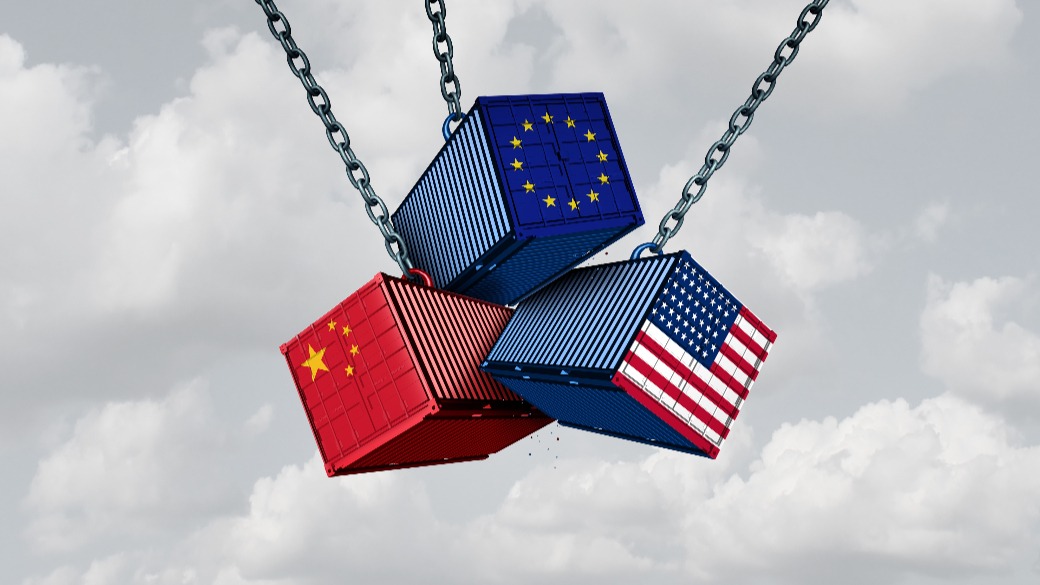 The trade conflict between the US and China has now clearly escalated into the currency realm. This will force Europe to respond to avert being the “variable of adjustment” for an economic conflict from which it cannot remain an innocent bystander.

Last Thursday, US-President Trump announced levies of 10 percent on a further $300 billion in US imports from China effective on September 1, 2019. This was prompted by a collapse of the US-Chinese trade discussions in Shanghai last week. The new tariffs will bring all of the US’s $509 billion in imports from China to some level of tariff. China has imposed levies of its own on 85 percent of its imports from the US and is likely to also add tariffs on the remaining imports worth $20 billion. More importantly, China will undoubtedly explore additional ways to respond to further escalation in trade tensions from the US.

China has several options. It can reinstate US automobile tariffs that it had lifted in December 2018 as a gesture of goodwill. It can also further cut imports of agricultural goods from the US and impose tariffs on oil and gas imports – which would incidentally increase its demand from Iran. More consequential for the world, China can use the exchange rate to alleviate the pressure created by US tariffs on its economy. It has already started to do so by letting the USD/CNY exchange rate surge through 7.0, but this is likely to only be the beginning.

The transformation of this so far bilateral trade conflict into a currency conflict has far-reaching consequences for the world. By weakening its exchange rate, China is spreading the cost of US tariffs onto the rest of the world and is, hence, internationalizing the conflict. This will force other countries to take measures to limit the spill-overs: fiscal and monetary reactions by other players will likely follow. A recent paper finds that trade tariffs have more effects on import/export elasticities than FX movements, and therefore, devaluations need to be large to offset rather small tariffs. It concludes, for example, that a 14 percent depreciation of the renminbi against the US Dollar would be necessary to erase the effect of a 5 percentage point average increase in US import tariffs in order to achieve a given trade deficit.

From Trade to Currency

The effective devaluation of the CNY required to offset further American tariffs could therefore be very substantial and would provoke a realignment of global exchange rates, with substantial appreciation of the Euro and the Yen. Indeed, since February 2016, the global exchange rate markets operate under an untold framework agreed on the meeting of the G20 Summit of Finance Ministers in Shanghai. After the shock CNY devaluation of August 2015 that unleashed destabilizing capital flight from China and accelerated the appreciation of the USD, the Federal Reserve had tacitly agreed to delay its tightening cycle provided China also contained depreciation forces weighing on the CNY through a mix of interventions and capital controls. This basic agreement has largely held with the Powell Federal Reserve, which has remained quite sensitive to movement in the Dollar and insistent along with the US Treasury and US Trade Representative on China limiting depreciation of the CNY. Japan and the Euro Area have been great indirect beneficiaries of this Sino-American understanding, which has contributed to policing exchange rate volatility and capital flows since then. This is now unravelling with serious consequences for the world and especially for those surplus countries that had been hitching a free ride on the Shanghai deal.

The intensification of the trade-cum-currency conflict would inevitably force countries with the most currency appreciation potential to shoulder a greater part of the burden of the adjustment between the US and China. In addition, these adjustment efforts might well increase as the US president himself weighs in, intensifying pressure on the Federal Reserve (maybe up to the point of removing its chairman and even contemplating currency intervention). President Trump’s rhetoric against recent policy decisions by the European Central Bank (ECB) suggests that the US administration is alert and prepared to also export the currency discussions beyond China. The recent G20 meetings and the G7 meeting of Finance Ministers and Central Bankers in Chantilly have made every effort to avoid this sensitive topic by sticking to their previous (but vague) commitments on exchange rates, but this will be insufficient to address the breakdown of the Shanghai truce.

These issues are liable to erupt or form the background to the G7 meeting in Biarritz at the end of August. They are also going to be more central to debates around economic policy coordination in Europe. In the event of a real escalation, the Euro Area would have to achieve monetary financed fiscal expansion of a sufficient scale in order to avert a substantial increase in the EUR real effective exchange rate that would further diminish inflation expectations and growth. The only way to achieve this would be a significant and coordinated fiscal expansion (say to the tune of 1 percent of the Euro Area’s GDP) allowing the ECB to resume its quantitative easing program in response to the deflationary impulse provoked by the escalation of the trade-cum-currency conflict.

But despite the well-founded warnings by the OECD and a few lone voices in Europe, these policy debates have barely started. Both Germany and the EU are constrained by fiscal rules that would need to be revisited in a scenario where both the currency and the economy may come under such pressure. Meanwhile, France continues to game the fiscal rules but stays shy of launching a discussion on the needed reforms of the fiscal framework or on the need for coordinated fiscal expansion. Finally, the ECB keeps on demanding more fiscal accommodation, but refrains from saying explicitly by how much and from which country. If the Euro Area cannot achieve internal economic policy coordination, the Euro will become the external variable of adjustment of the US trade-cum-currency conflict. It is high time that the Europeans start thinking about the dear external costs (for them and the for the world economy) of their poor internal policy coordination. China and the US might force them to, and the G7 meeting in Biarritz on August 24 is a good place to start.

Shahin Vallée is a Senior Fellow of the Alfred von Oppenheim
Center for European Policy Studies at the German
Council on Foreign Relations (DGAP).